How to Fix Education: A Handbook for Direct Action

If we assume the capture of the American university by the “national economic dogma,” as Nietzsche called education in the service of money-making careerism, what concrete actions might a change-minded teacher take? This is the question driving How to Fix Education. 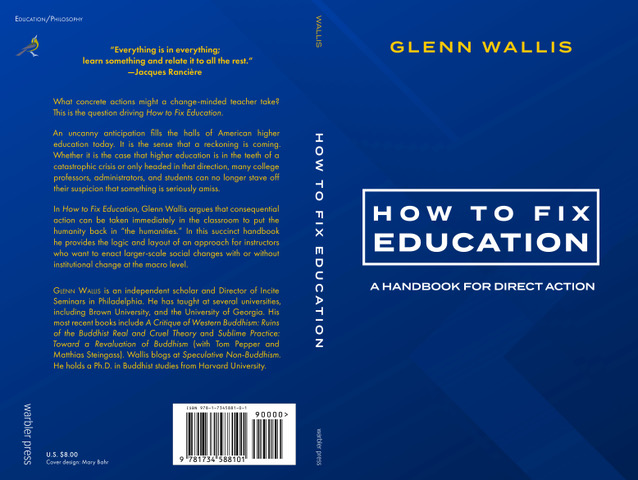 Explication is the annihilation of one mind by another…Whoever teaches without emancipating, stultifies.
—Jacques Rancière, The Ignorant Schoolmaster

Change life! Change society! These precepts mean nothing without the production of an appropriate space…New social relationships call for a new space, and vice versa. —Henri Lefebvre, The Production of Space

Read a review by Chaim Wigder:

It is a common assumption among professors that this is just the way things are, and that radical experiments in the classroom cannot be carried out under the current system. While it is quite true that the current education system actively opposed the kind of approach described in For Education, Wallis argues forcefully that any changes we hope to see within the university must originate in the classroom, rather than in the administrative offices, for it is within the former that student subject formation takes place. It is the deep responsibility of educators to resist the repressive program forced upon the classroom by the logic of the neoliberal university. For Education provides a critically necessary outline of just what such resistance may look like.

I found this book when I needed it the most, toward the end of a very tiring academic semester. After months of trying new methods of teaching and mostly failing. I found in the book another person for whom education is an issue. A problem. A question. A quest. That, in and of itself, was remedy for my heart and soul. It was refreshing to read Wallis’s words.

Buy!
Read!
Change education from the inside (the classroom) out (our shared world)!